There are potentially serious implications to a prosecution for fare evasion or TFL oyster card offences. Railway and train companies are increasingly seeking to crack down on fare evasion, and we are seeing large number of people being prosecuted in the courts for what appear to be very minor infractions.

Fare evasion is punished in court by a fine of up to £1,000. However, the imposition of a criminal conviction often carries far more serious consequences and could lead to the loss of your job.

A genuine mistake or misunderstanding can still result in these consequences. However, the Prosecutions Units are typically more concerned with deliberate Fare Evasion, such as buying tickets which do not cover the whole journey or travelling on expired Railcards. In the case of TfL, they tend to prosecute the misuse of ‘high value’ travel cards (Freedom Passes, Zip Cards and weekly or monthly passes).

It is extremely important to know that, with the right approach, a criminal conviction can be avoided. This is what we seek to achieve on your behalf, by settling the matter out of court.

We can step in on your behalf to seek to prevent a criminal prosecution at any stage prior to a court hearing date. However, we recommend that this is done as early as possible in the proceedings to maximise your chance of success.

Reeds’ Fare Evasion Solicitors can provide advice and services throughout England and Wales. If meeting in person isn’t possible, we can offer remote consultations through Zoom, Teams, Skype and WhatsApp. We can also often offer appointments outside normal office hours.

What is fare evasion?

If you are unable to show a valid ticket for all or part of your journey to a ticket or revenue inspector you may be accused of fare evasion. Fare or ticket evasion is travelling on public transport without paying the correct fare, whether deliberately or inadvertently. This is sometimes referred to as ‘fare dodging’ or by the method used, such as ‘turnstile jumping’ or ‘tailgating’.

Fare evasion is prosecuted in one of two ways:

What constitutes as fare evasion?

You may be prosecuted for the following:

What happens if you’re accused of fare evasion? 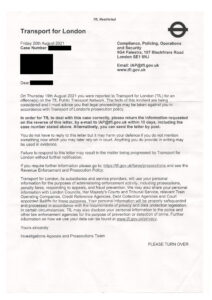 The train company (TFL or various others) typically write to an individual who is suspected of fare evasion, asking them to confirm whether they accept that they committed the offence. There will be an opportunity to provide information to ‘take into consideration’ while they consider a prosecution.

Some train companies, such as Thameslink, send out a Notice of Intended Prosecution, which clearly states that it is their intention to take the matter to the Magistrates’ Court.

A number of regional railway companies (including Cross Country and Chiltern Railways & Transport for Wales) employ Transport Investigations Limited (TIL) to recover revenue and prosecute cases on their behalf as an agent. You may therefore receive correspondence from TIL.

In advice set out by TfL, it reminds those that are being prosecuted for allegedly committing an offence to seek advice from a solicitor. It confirms that fare evasion (under the byelaw) is a “strict liability offence”, which means that intention is irrelevant; You may be guilty by simply not holding a valid ticket.

How long do I have to respond to a fare evasion letter?

When you receive the initial letter, it is an ideal time for us to intervene on your behalf, because the final decision to prosecute has not yet been made by the train company. It’s a great opportunity to set out personal mitigating factors and supporting documents.

What happens if I’m prosecuted for Fare Evasion?

If they decide to prosecute, you will receive a Court Summons in the post, providing a date when the hearing will be heard. The form will ask you whether you intend to plead guilty or not guilty and will give you an option to enter your plea by post.

It is extremely important that you do not complete this paperwork without consulting a solicitor if your aim is to avoid a criminal conviction.

Will I get a Criminal Record for Fare Evasion?

If you were to plead guilty at court or to be found guilty after a trial, this is a criminal conviction. This can affect your ability to secure jobs and work. It may prevent you from travelling to certain countries, and could influence visa decisions if you are not a current British Citizen.

Will fare evasion show up on my CRB or DBS check?

CRB checks were taken over by the Disclosure and Disbarring Service (DBS) in 2012. All criminal record checks for a job are undertaken by the DBS.

A conviction under s.5 of the Regulation of Railways Act 1889 would appear on a standard DBS check until ‘spent’. It would also appear on an enhanced DBS check until ‘filtered’ after 11 years. No doubt this can have a profound impact on someone’s career prospects, particularly in certain fields.

The conviction may also have to be disclosed on various types of visa and immigration applications.

What can a solicitor do for me?

We have many years’ experience in dealing with the various train companies and have an excellent track record of settling the matters out of court.

We can make an out of court settlement offer on your behalf. This includes drafting powerful and persuasive arguments to convince the company not to prosecute you.

The best fare evasion solicitors will have a direct line of contact with the relevant Prosecutions Unit and can make representations on your behalf in an efficient and timely way.

In short no. Legal aid is not available to cover legal fees for fare evasion offences at court.

How much does a fare evasion solicitor cost and what does the service include?

We offer a fixed fee service.

What transport companies can you handle prosecutions from?

D was travelling home on a ticket which did not cover the full journey. There were no barriers at his destination station, so the Ticket Inspector was immediately suspicious of the explanation given that it was a simple mistake. D had written to Transport Investigations Limited (acting as agents for Chiltern Railways) to ask them not to prosecute but they responded that they were pressing ahead with the court case, which was only one week away by the time that Reeds were instructed. We submitted representations and the matter was settled out of court.

E was a medical student, who used his sibling’s 11-16 Zip Card to travel on the London Underground with a 50% discount. TFL wrote to him to verify his details, which would normally lead to a prosecution. Reeds were instructed to write representations to avoid a criminal conviction. We submitted a detailed letter with more than 10 accompanying documents and TFL agreed to issue a Warning Letter instead of a prosecution.

B was travelling into London over a 3 month period, purchasing a ticket which did not cover the whole journey. As the turnstiles were always down in his local station, he was able to board the train without his ticket being checked. He purchased a ticket from a station much closer to his final destination, saving approximately £15 on each trip. The train company noticed this suspicious pattern and stopped him when he arrived into London. He was invited for an interview under caution. He had a conference with Reeds solicitors and received advice about whether to agree to be interviewed. Successful representations were made to settle the matter out of court.

“I highly recommend Reeds Solicitors and Nathan Seymour-Hyde and I wouldn’t go anywhere else. It was our first time we had contacted them as my child had committed serious offence with tfl. They had enough evidence to prosecute him and if he was prosecuted my child would have lost everything including his professional career. I really wanted to highlight that our case was a very difficult one.

We contacted a few solicitors I must say I didn’t find the other solicitors approachable at all and all we were told its very difficult for my child not to be prosecuted. Luckily when searching online, Reeds Solicitors were listed I gave them a call from my very first call they were so so amazing helpful, professional and very understanding this was just reception staff. We were then put through to Sofia who was again amazingly helpful and was very reassuring and totally understood and very sympathetic with us. She kept us updated all the way throughout and any questions I had even though i made many contacts via phone and emails she was always very prompt getting back to me.

I would high​ recommend Nathan Seymour-Hyde. Nathan dealt with our case. He is very knowledgeable and very informative. always responded promptly to us. Really went that extra mile to help us. He was a breath of fresh air for us. Our case was extremely difficult to win and we really had no hope with the offence that was committed. We were very lucky to have been with Nathan. Nathan gave my son new life.

I would highly recommend Reeds Solicitors they are also lot cheaper than others and more so they care for their Customers. I felt for Reed it’s not all about making money it’s also about, professionalism, customer service and caring for people. Whole team are so friendly and approachable. They all work as a team.

Fare Dodgers – at War with the Law