“"A resourceful and talented partner whose presence in a case is always reassuring."”

“"Neil has an uncanny ability to be able to soak up vast reams of dense information at seemingly superhuman speed."”

““Dedicated, intelligent and skilful in the pursuit of clients’ interests’’”

Neil Williams is the Deputy Head of Complex Crime, based in our London office.

Recognised for his “real ability to marshal voluminous evidence’’ and his rapport with clients, Neil is acknowledged as one of the leading solicitors in the fields of business and serious crime.

Bringing with him a wealth of experience in white-collar law, Neil specialises in global bribery, cross-border and corruption cases. His caseload is usually formed of particularly complex, high-profile, and large-scale business crime cases involving the world’s major companies and organisations. Neil is regularly instructed to represent those facing allegations of fraud on a huge scale involving the energy sector and financial services, multinational and worldwide white-collar crime.

Neil was the natural choice to be involved in the first UK cases to involve deferred prosecution agreements and SFO Bribery Act prosecutions. He frequently conducts discrete internal investigations for corporate clients, with investigations spanning the globe. Neil’s legal acumen and professional discretion has led him working with those facing accusations of corruption in public office, including allegations relating to the award of maintenance contracts in the Royal Households.

Neil is available to advise and represent those who wish to bring private prosecutions.

In accordance with the Solicitors’ Regulatory Transparency Rules for motoring offences we confirm that Neil Williams charges Level A hourly rates. 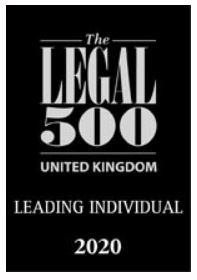 Article: Neil Williams discusses why Cum-Ex fraud investigations are on the rise in an article; ‘Why Cum-Ex Tax Fraud Probes Are On The Rise’ (November 2020, subscription needed)

Acted for an individual who was the first person prosecuted for a breach of a s2 notice issued by the SFO.

Acted for individuals accused of bribery relating to commercial contracts awarded by a flawed procurement process within the Royal Households and Harrods.

Successful defence of a City of London police prosecution involving a business relationship manager at Barclays Wealth International Ltd based in the Isle of Man dealing with HNW individuals and SPV’s, with mortgage fraud totalling approximately £40m. (Operation Aquamarine)

Acted in the first FCA prosecution where they have exercised their ability to prosecute in the criminal courts under consumer credit powers.

HMRC prosecution for tax evasion schemes in excess of £175M which morphed from film industry to ecological investments. Described by the prosecution as being a scheme which moved, ‘from movie moguls to eco-warriors’. The client was a leading international academic who advised governments across the world on ecological policy.

Bribery allegations against an individual said to have secured contracts for fire control installation and maintenance contracts in council properties.

Regulatory/Internal Investigation
Conducting review of an instructing company policy and proceedings following allegations of fraud. The company was a forwarding agent collating invoices as part of a £40m development contract in Mayfair. Enquiries spanned the globe and resulted in a negotiated settlement despite a complaint to police.

Regulatory/Internal Investigation
Advising individuals in regard to issues before regulatory bodies including the GMC.

Regulatory/Internal Investigation
Review of the business practices of a betting syndicate in excess of £10m, where media report suggested fraudulent activity. Advising on the appointment of Insolvency Practitioners and civil remedies.

Regulatory/Internal Investigation
Successful challenge to Met police investigation into the business of an MSB based in London. solicitors have now issued an apology, with all monies seized during the course of investigations returned.

SFO Investigations
Acted for the former Managing Director of a global construction company investigated for his alleged part in facilitating payments resulting in the award of contracts in Morocco and the UAE in excess of £180m.

SFO Investigations
Acting for former Chairman and CEO of an engineering company said to have overseen the facilitation of illicit payments to secure contracts in multiple jurisdictions.

SFO Investigations
Acting for the former Chief Sales Manager for an Oil and Gas company working in Central Asia, investigated as part of the Unaoil investigation into corrupt payments to secure multi billion dollar contracts.